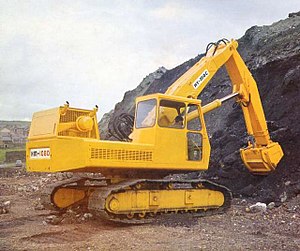 Excavator – a type of construction truck and machinery, also called a digger, sometimes abbreviated simply to a 360 (from 360-degree excavators), an engineering vehicle consisting of a backhoe and cab mounted on a pivot (a rotating platform) atop an undercarriage with tracks or wheels. Their design is a natural progression from the steam shovel.