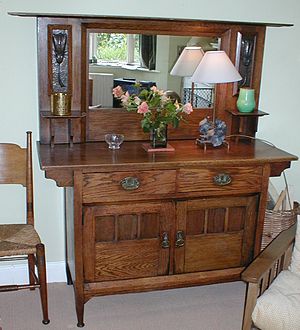 Arts and Crafts Movement – an international design movement that flourished between 1880 and 1910. It was led by the artist and writer William Morris (1834–1896). It stood for traditional craftsmanship using simple forms and often applied medieval, romantic or folk styles of decoration. It advocated economic and social reform, and has been said to be essentially anti-industrial.

Arts and Crafts movement was a late-19th century response to the Industrial Revolution mass production, and to the excessive decoration of the Victorian Era.

Works of great individuality were produced by different regions and countries because the local history, materials and sources were important.