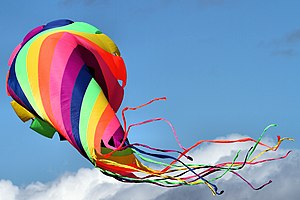 Kite – a tethered aircraft. The necessary lift that makes the kite wing fly is generated when air flows over and under the kite’s wing, producing low pressure above the wing and high pressure below it. This deflection also generates horizontal drag along the direction of the wind. The resultant force vector from the lift and drag force components is opposed by the tension of one or more of the lines or tethers to which the Kite is attached. The anchor point of the kite line may be static or moving (e.g., the towing of a kite).