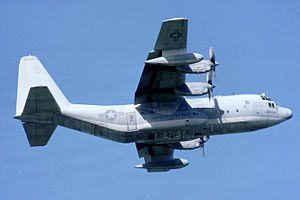 Lockheed KC-130 Super Hercules – In continuous production longer than any other military aircraft, the C-130 has earned a reputation as a workhorse ready for any mission, anywhere. This rugged aircraft is regularly sent on missions in the harshest environments, and is often the first aircraft to touch down, usually on austere landing strips before any other transport to provide humanitarian relief after natural disasters. With more than 1.2 million hours of flying combat, humanitarian, special operations, aerial refueling, firefighting, and search and rescue missions around the world, the C-130J stands ready for its next mission and for whatever the future holds.

C-130 Aerial Achievement (video 5:17) – During 1963, a KC-130F aircraft made history by landing and taking off from the aircraft carrier; USS Forrestal (CVA-59). The crew successfully negotiated 29 touch-and-go landings, 21 unarrested full-stop landings, and 21 unassisted takeoffs at gross weights of 85,000 pounds up to 121,000 pounds.
Lockheed’s only modifications to the original plane included installing a smaller nose-landing gear orifice, an improved anti-skid braking system, and removal of the underwing refueling pods.
No tail hook…No catapult. Painted on the side of the fuselage; "LOOK MA, NO HOOK."
The airplane became the largest and heaviest aircraft to ever land on an aircraft carrier, a record that stands to this day.

Meet the people in … Engineering