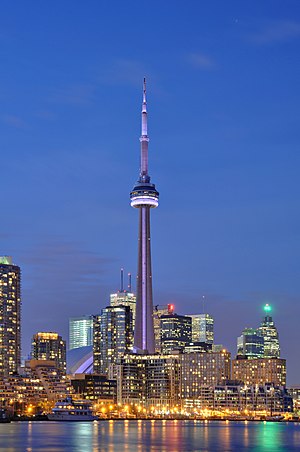 CN Tower – The world’s tallest free-standing structure soars 1,815 ft. above the sidewalks of Toronto, three times the height of its better-known cousin, the Seattle Space Needle. The CN Tower, as heavy as 23,214 large elephants, was erected at an amazing rate of 18 ft. per day. During construction, concrete flowed from the bottom of the tower as it ascended, while aircraft-type bombsights kept the tower plumb as it went up. Today the tower is off by a mere 1.1 inch.

Designed with the aid of a wind tunnel, the CN Tower can withstand 260-mph gusts. The SkyPod, a seven-story structure 1,100 ft. high, was built around the base of the tower and jacked into place as one unit. A pair of 10-ton counterweights are attached to the mast to keep the tower from swaying too much.

A Sikorsky helicopter hoisted the crowning antenna, for which the tower was originally erected. FM radio signals are broadcast from the base of the antenna, while television signals are sent from the top. Presently, 16 of Toronto’s media signals are transmitted from the tower.

June 26, 1977: The CN Tower was a triumph of engineering: rivers of concrete poured into a giant mould to fashion a heavens-piercing spire. More than that, it was an exercise in ambition. Canada, still glowing from its glorious Centennial, was in an expansive mood, eager to show it was more than a shy sidekick to its American cousin. The 1976 Olympic Games, Canada’s first, were about to open in Montreal. A dashing, brilliant prime minister, Pierre Trudeau, was prime minister. Toronto was shaking off its dour provincial background, welcoming throngs of newcomers and populating its downtown with gleaming skyscrapers. Under an energetic, reforming mayor, David Crombie, it had started to imagine, rather prematurely, that it was a “world-class city.” Building the world’s tallest free-standing structure would prove it. The 553-metre telecommunications tower held those bragging rights for 34 years, until another band of strivers half a world away in Dubai topped the feat with the Burj Khalifa. Built by private enterprise for $52-million in 40 months, the CN Tower still stands for an anything-is-possible attitude … The Globe and Mail