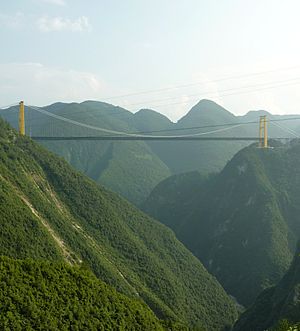 Bridge – a structure built to span physical obstacles such as a body of water, valley, or road, for the purpose of providing passage over the obstacle. There are many different designs that all serve unique purposes and apply to different situations. Designs of bridges vary depending on the function of the bridge, the nature of the terrain where the bridge is constructed, the material used to make it and the funds available to build it.

There are many types of bridges but only a few basic bridge structures. They include: girder bridge, truss, rigid frame, arch, cable stayed, suspension. This video describes how bridges work.

Getting to the other side

For centuries, bridges have been built to provide a shortcut over rivers and uneven terrain. Simple bridges are just a log or a piece of wood over a stream. Other bridges are amazing structures that required innovation and extreme engineering to design and build. The basic requirement is the same – getting to the other side. Questions correspond to the steps in the [/Engineering%20Design%20Process Engineering Design Process].

Do it
Here are some challenges for you to work on…