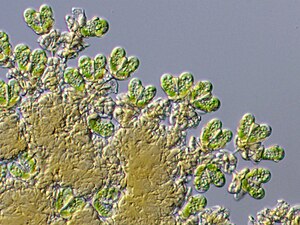 Algae – large and diverse group of simple, typically autotrophic organisms, ranging from unicellular to multicellular forms. Most are photosynthetic like plants, and “simple” because they lack the many distinct cell and organ types found in land plants. The largest and most complex marine forms are called seaweeds.

Ethanol – a flammable, colorless chemical compound often referred to simply as alcohol. It is a straight-chain alcohol and its molecular formula is represented as its empirical formula C2H6O. Ethanol has a long history as a fuel, including as a fuel for internal combustion engines.

Algae can be converted into various types of fuel, depending on the technique and the part of the cells used. The lipid, or oily part of the algae biomass can be extracted and converted into biodiesel through a process similar to that used for any other vegetable oil, or converted in a refinery into “drop-in” replacements for petroleum-based fuels. Alternatively or following lipid extraction, the carbohydrate content of algae can be fermented into bioethanol or biobutanol.

Algae Biofuel – Microalgae-based biofuel has the potential to fulfill some of the world’s energy demands. Microalgae produces much higher yields of fuel-producing biomass than other traditional fuel feedstocks and it doesn’t compete with food crops. Algae yields about 2,500 gallons of biofuel per acre per year. In contrast, soybeans yield approximately 48 gallons; corn about 18 gallons. It is estimated that some countries could produce enough algal biofuel to supplement more than 30 percent of their fuel consumption.

What’s the problem?
biofuel – energy density. Ethanol has approximately 1/2 as much energy per gallon as gasoline. gasohol and ethanol have far lower energy densities than gasoline, they will accomplish less work per unit of volume. In fact, a car burning one unit of ethanol will only travel 70% as far as the same vehicle burning the same volume of gasoline.