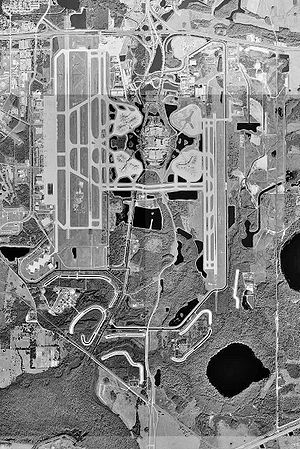 Airport – a location where aircraft such as fixed-wing aircraft, helicopters, and blimps take off and land. Aircraft may be stored or maintained at an airport. An airport consists of at least one surface such as a runway for a plane to take off and land, a helipad, or water for takeoffs and landings, and often includes buildings such as control towers, hangars and terminal buildings. Larger airports may have air traffic control, passenger facilities such as restaurants and lounges, and emergency services.

The earliest aircraft takeoff and landing sites were grassy fields. The plane could approach at any angle that provided a favorable wind direction. A slight improvement was the dirt-only field, which eliminated the drag from grass. However, these only functioned well in dry conditions. Later, concrete surfaces would allow landings, rain or shine, day or night.

There are a number of aids available to pilots, though not all airports are equipped with them.

What’s the problem?
Runways have to withstand huge forces as heavy aircraft takeoff and land, and provide room for big aircraft to get stopped as well. Some older airport do not have space for extending the runway, so special soft material is being installed to slow down aircraft beyond the end of the regular runway.

FAA Overrun (video 1:00) – an FAA 727 taking part in an over-run demonstration to show the benefits of the Engineered Materials Arrestor System (EMAS) for slowing an aircraft in an emergency.